Dr. Daniel K. Adler. 74, died Sunday at Crouse Irving Memorial Hospital. A physician in Syracuse with
offices at 1200 E. Genesee St., Dr. Adler was a 1935 graduate of Syracuse University and a 1939 graduate of SUs medical school. He was a letterman in lacrosse while an undergraduate. He interned at Mount Sinai Hospital, Cleveland, and at Kings County Hospital in Brooklyn. From 1941 to 1946 he was a lieutenant Colonel with the U.S. Army and was chief of medical service in the base hospital in Newfoundland from 1941 to 1942. He then served as regimental surgeon for the 104th Infantry of the 26th "Yankee" Division. He served in the Saar Basin an took part in the Battle of the Bulge. He served as well in Austria and Czechoslovakia and received the Bronze Star for service in France and Luxembourg. Upon discharge he returned to Mount Sinai Hospital in New York City. He practiced medicine in Syracuse since 1947. He served on the staff at CIM Hospital and at the University Hospital and was an associate professor in the Department of Medicine at the SUNY Health Science Center. He was a fellow of the American Board of Internal Medicine and was a member of the American College of Cardiology. He was also a member of the Lancet medical organization and belonged to the American Medical Association and the state and Onondaga County medical societies. He was a member of Temple Adath Yeshurun and the temples mens club. An avid golfer, Dr. Adler was a member of the New York State Seniors Golf Association and the LaFayette Country Club. He was a member of the Varsity Club and served on its board of directors. He was also a member of the Hardwood Club and the Orange Pack. He was also a member of the Syracuse Jewish Federation and served on its board of directors. He is survived by his wife, Rosamond of Syracuse; two sons, David of Seattle, Wash., and Richard of Syracuse; a daughter, Joan Adler of Northridge, Calif.; two sisters, Sophie Adler of Syracuse and Ruth Kirstein of Forest Hills; two grandsons; and several nieces and nephews. A memorial service will be conducted at 12:30 p.m. Wednesday at Temple Adath Yeshurun. Rabbi Charles S. Sherman and Cantor Harold Lerner will officiate. Friends may call from 11:30 a.m. to 12:30 p.m. at the temple, 450 Kimber Road. In lieu of flowers, contributions may be made to the Dr. Daniel K. Adler Memorial Fund, in care of the Crouse Irving Memorial Foundation. Birnbaum Funeral Chapel is in charge of arrangements.
Syracuse Herald Journal March 20, 1989
Burial Location
D12 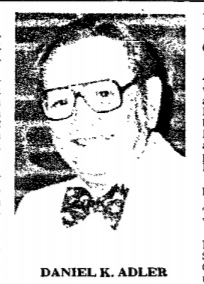