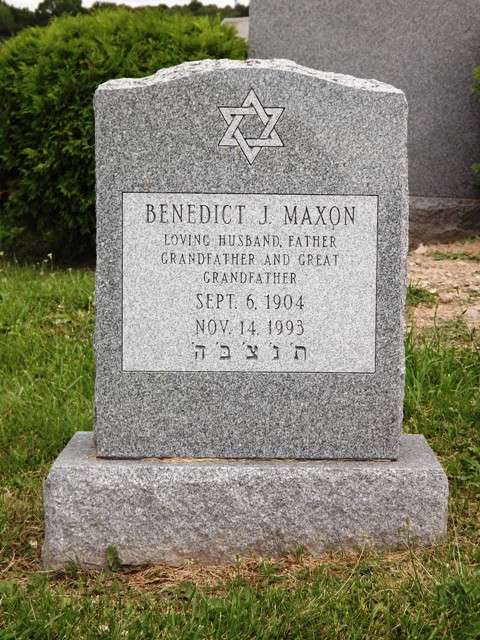 
Syracuse Herald-Journal (NY) - Tuesday, November 16, 1993
Benedict J. Maxon, a retired businessman who was active in Jewish and community affairs, died Sunday at the Jewish Home of Central New York. He was 89 and formerly lived at 121 LaFayette Road, Syracuse.
Mr. Maxon founded A and E Window Center with his wife, Beverly, in 1942. The couple ran the Venetian blind manufacturing and window covering business until retiring in 1982. The business began on Butternut Street, moved to South Salina Street and later was located on lower James Street. Mrs. Maxon died in March 1992. Mr. Maxon was a member of Temple Adath Yeshurun, its Mens Club and was active in the temples former bingo program. He was a former president of Temple Adath\\\'s seniors group. For years, he and his wife coordinated its activities. Mr. Maxon joined Philo-Mount Sinai Lodge, F and AM, in 1924. He held many offices, rising to master. In 1974, he received a distinguished service award from the Grand Masonic Lodge of New York. With the help of his wife, he organized Cub Scout Pack 40 at Temple Adath Yeshurun. He also did volunteer work at Crouse Irving Memorial Hospital. Mr. Maxon, a life resident of Syracuse, was called Ben. He was a 1925 cum laude graduate of Syracuse University. His favorite pastime was singing, his son Stephen said. "We would go on a trip, and he would be singing the whole time. His favorite song was "Barney Google with the Googly, Googly Eyes." "For every occasion - wedding, bar mitzvah, a get-together around the block - he would take a popular tune and add words to it. Corny, but some people got a real kick out of it." His parents marriage was a close one, Stephen Maxon said. "He and my mother were just like kids right up until the time they went. They were really a pleasure to be with." Surviving are two sons, Barry of Syracuse and Dr. Stephen of Livermore, Calif.; three grandchildren; and a great-grandson.
Services are 2 p.m. Wednesday at Birnbaum Funeral Chapel, Rabbi Charles S. Sherman and Cantor Emanuel Perlman officiating. Burial is in Adath Yeshurun Cemetery, Syracuse. Calling hours are 1 to 2 p.m. Wednesday at the funeral home, 1909 E. Fayette St., Syracuse. Masonic services are 1:45 p.m. Wednesday at the funeral home.