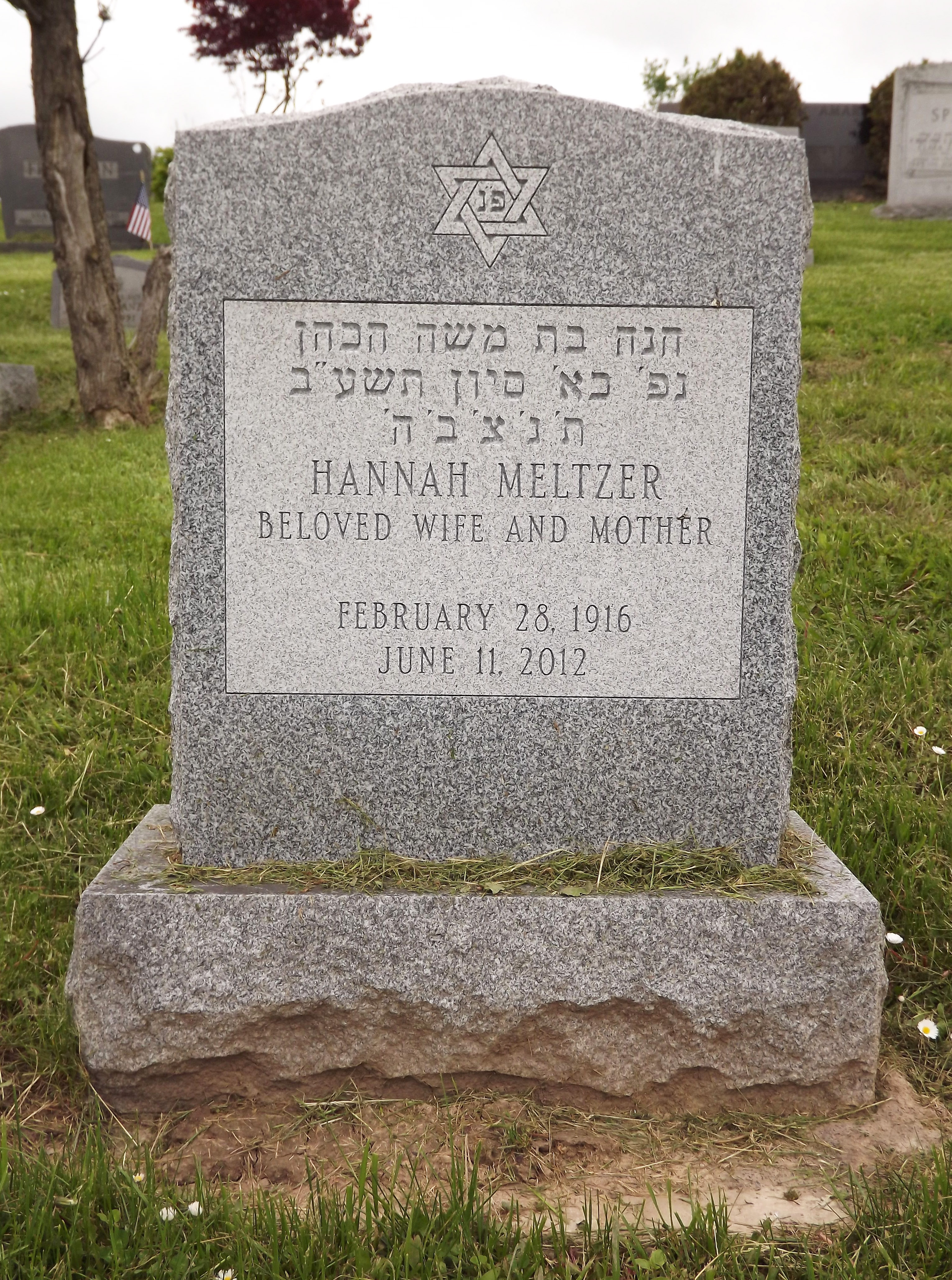 Hannah was born Hannah Cohen in Oneida, New York on February 28, 1916, and was brought up in Lakeport, NY, the third of four siblings. Her parents were Morris Cohen, from Wladyslavia, Russia, born 1875, and Annie Berkowitz of Zakot-Korener, Russia, born 1889. They were married in 1910. Morris owned a General Store in Lakeport, New York, on the corner of Route 31 and Lakeport Road, just north of Chittenango. Hannah attended a one-room schoolhouse in Lakeport and then went to Chittenango High School. In 1933, Hannah Cohen married Barney Meltzer, an attorney from Syracuse, who came as a young boy with his family from Vilna, Lithuania. Barney graduated from the Syracuse University College of Law and practiced in Syracuse for 49 years until his death in 1983. Hannah raised two boys, Michael, born in 1941, a physics teacher (retired), and Stephen, born in 1943, a television art director (retired). Michael married Sandra Ellison of Syracuse and have three children. Stephen married Elaine Moses of Norwich, New York, and also have three children. Hannah has six grandchildren and 12 great-grandchildren.

Hannah had a talent for art, and in the 1950s, began taking painting and ceramic courses at Syracuse University College. She soon opened a ceramics studio in her home on East Fayette Street where she taught hundreds of adults and children ceramics over a period of 45 years. Some had physical or emotional problems, and through ceramics as a form of art therapy, Hannah, with her patience, humor, and caring nature, helped many of these students. She also sold her paintings, ceramics and jewelry for many years in her studio and at local art shows.

Hannah and Barney\\\'s home was, for many years, the focus, for family and friends, of Sunday night pizza, Passover seders, Thanksgiving and other formal and informal gatherings. Hannah was known for her creative spirit, happy, loving disposition and kind heart. With her family, there were frequent fishing trips to Oneida Lake, the St. Lawrence River, and vacations to Cape Ann, Florida, Arizona, and Hawaii. Hannah attended many Elderhostels, and took several trips to Israel where she had relatives. Hannah was very active as a volunteer at Temple Adath Yeshurun, and enjoyed the activities for seniors at the Jewish Community Center.
She was predeceased by her brothers, Drs. Edward and Philip Cohen who, together, had a dental practice in Syracuse for many years, and her sister, Mollie Weiner of Syracuse.

Contributions may be made to the Menorah Park Terrace Unit and Temple Adath Yeshurun Sisterhood.
Funeral services will be at 11 a.m. Thursday at Sisskind Funeral Chapel. Friends may visit with the family immediately prior to the service tomorrow from 10 to 11 a.m. at the funeral chapel, 3175 E. Genesee Street. Shiva will be observed Thursday evening from 7 to 9 and Sunday from 2 to 4 p.m. at Stephen and Elaines home.

Published in the Syracuse Post Standard from June 12 to June 13, 2012
Burial Location
P19C