Larry Rothenberg, 65, died Sunday at his home in Manlius. A life resident of Syracuse, Larry had retired in 2009 from Onondaga Beverage Co. where he enjoyed a well earned reputation as a preeminent sales representative and industry leader from his co-workers and competitors alike. In retirement Larry enjoyed breakfasts and coffee with his friends, and cruising with the Corvette Club. Larry served his country as a member of the National Guard. He was a member of Temple Adath Yeshurun where he was proud to usher during the high holy days; and was active with the Make-A-Wish Foundation of CNY, The Carol Baldwin Breast Cancer Foundation, and the Manlius Fire Department. Larry was predeceased by his father, Joe in March of 2006; his daughter, Amy in December of 2008; and his wife, Janice in July of 2009. He is survived by his mother, Helen; his brother and sister-in-law, Steve and Marsha and their children Tiffany and Delilah; his sister-in-law, Susan Snyder and her children, Wendy (Ryan), and Doug; his aunt, Muriel Elman; his former son-in-law, Tom Fazzio; his cousins, Susan (Stuart) Sloane, Rick Levy, David (Susan) Rothenberg, Pam (Michael Hill) Rothenberg; and Jill (Jane) Rothenberg-Simmons; and a large and loving extended family. Funeral services will be at 2 p.m. Wednesday, February 5 at Sisskind Funeral Chapel. Friends may visit with the family from 1 to 2 p.m. Wednesday at the funeral chapel, 3175 E. Genesee Street. Burial will be in Adath Yeshurun Cemetery. Contributions in Larrys memory may be made to any of the organizations that were important to him. Shiva will be observed at Steve and Marshas home Wednesday, Thursday and Saturday evenings from 7 to 9 p.m.
Published in Syracuse Post Standard from Feb. 3 to Feb. 4, 2014 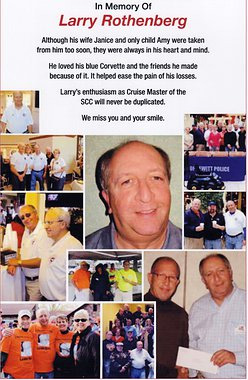