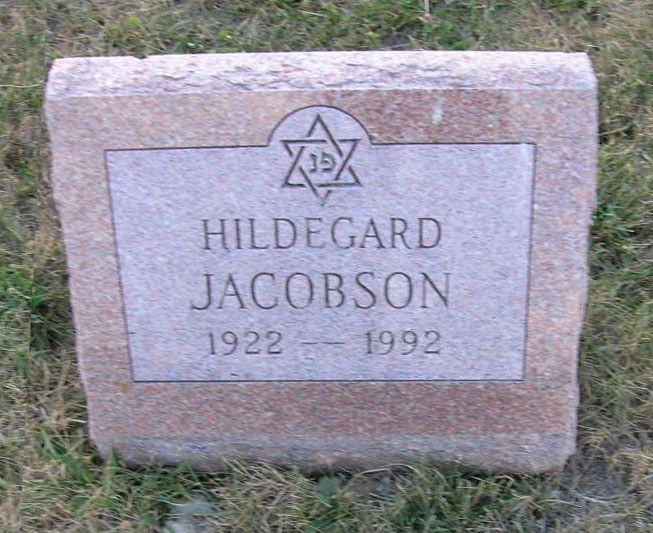 
Syracuse Herald-Journal (NY) - Tuesday, December 29, 1992
Hildegard Aschenbrandt Jacobson, a leader in the Jewish community in Syracuse for many years, died Sunday at her home in Fort Lauderdale, Fla. She was 70. Mrs. Jacobson was a former president of AMIT Women\s Organization; ran the annual rummage sale at Temple Adath Yeshurun, where she was a member; and coordinated kosher meals for Meals on Wheels during the 1970s. She also visited residents of the Jewish Home of Central New York, often shopping for them. "There are a lot of people there who had no family. One woman of German descent she called her foster mother," her husband, Leon, said today.
Mrs. Jacobson was born in Sontra, Germany, where her father had a general store. When she was 13, the family fled the Nazis, settling in New York City. "She went through a lot but not as much as most people because she got out early. I think it was 1936. It was obvious (to her father) business was being cut out. It made it very difficult," her husband said. Mr. and Mrs. Jacobson married in 1945 after his return from serving in World War II. They lived in Syracuse since 1951. During the 1960s, Mrs. Jacobson taught nursery school at the Jewish Community Center and kindergarten at the Temple Adath Yeshurun Sunday school. She was active with the Sisterhood at Temple Adath Yeshurun and Temple Beth Ahm Israel in Hollywood, Fla. Mrs. Jacobson enjoyed swimming year-round. For years, a group of women swam and played bridge together at Green Lakes State Park during the summer, dubbing themselves the Meshuga Mermaids Association or MMA. After retiring, she and her husband became involved with an antique business in Florida. Her specialty was linen items which she repaired. She was a proficient seamstress, her husband said. Surviving besides her husband are a son, Kenneth of Essex, England; a daughter, Joan Jacobson of Baltimore; a sister, Ruth Kirschenbaum of Delray Beach, Fla.; three grandchildren; and five nieces. Services will be at 2 p.m. Wednesday at Birnbaum Funeral Home. Burial will be in Adath Yeshurun Cemetery, Syracuse.
Burial Location
P9B