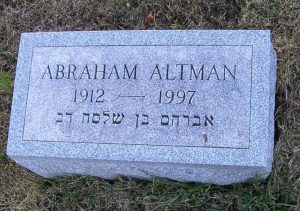 Syracuse Herald American (NY) - Sunday, July 27, 1997
Abraham Altman, 85, of East Lake Road died Friday at Crouse Hospital. Born in Troy, he lived in the Syracuse area 55 years. He was a 1933 graduate of Rensselaer Polytechnic Institute. Mr. Altman was owner and president of East Syracuse Chevrolet until his retirement in 1983. He was a member of Temple Adath Yeshurun and an honorary trustee of its board of directors. He was also a member of Temple Beth El and the Kiwanis Club of Eastwood. He served on the board of directors for the Girl Scouts of Central New York, Meals on Wheels, the Cerebral Palsy Foundation and the United Jewish Appeal. Mr. Altman was a mediator for the Better Business Bureau and a volunteer with Crouse Hospital since 1983. He was a veteran of World War II, serving as a major in the 43rd Infantry Division. Surviving are his wife, Anita; a son, Stephen of Washington, D.C.; a daughter, Elisabeth Altman of Massachusetts; two brothers, Joseph of California, and Henry of Schenectady; four grandchildren; and several nieces and nephews. Services are 11 a.m. today in Temple Adath Yeshurun, Rabbi Davis Sheinkopf and Cantor Harold Lerner officiating. Burial is in Adath Yeshurun Cemetery.
Burial: Adath Yeshurun Cemetery, DeWitt, Onondaga County, New York, USA

The late A.A. Altman What\'s in a name?
"Deceased: Abraham A. Altman" the obituary read, followed by an impressive list of loving service our friend and neighbor, Abe, has given to us in the Syracuse area. His humble, giving and dedicated fatherly example has touched many who never even knew his net \'Aura us to remember his many accomplishments, awards and decorations; nor would he want us to remember his name for his service, but rather to remember and carry on the pur Altman represents. Abraham represents a life blessed by believing in and serving God. and by believing in and serving others. Abraham represents a long life of peace and happiness through blessing others in kindness and cheer. Through years and years of faithful service, he has blessed the whole city of Syracuse where he worked and the town of Cazenovia where he called home. He has been a:
• disciplined and active servant of his synagogue and the community.
• loving husband and father.
• trusted and cheerful neighbor.
• trusted and loved manager of East Syracuse Chevrolet.
• wise decision-maker on various boards and committees.
• healer of the sick through his cheerful visits to hospital patients.
• cheerful and generous giver.
But where did Abe\'s strength come from? How can we follow his example? Perhaps it comes from the namesake he followed as a believing and praying man of God. Abraham of the Bible lived more than 4.000 years ago. but Abraham Altman has been a living example to all of us that the principles of Abraham\'s life are as valid today as they were then. We read in Genesis 12 through 25 how God promised Abram (later called Abraham) that if he\'d obey him. God would bless him, his family and "all peoples." By listening to God. Abram made wise choices. He became very wealthy by putting others first, even in tough times. He was a peacemaker and rescuer within his family; what he did for Lot was a great example. Abram realized that all he had came from and belonged to God. so he was free to return a 10th of all he received back to God and the Bible says. "Abram believed the Lord, and he credited it to him as righteousness." God changed Abrams name to Abraham, and Abraham bowed down, prayed, spoke and listened to God often. God gave him a son and instructed Abraham to "direct his children and his household after him to keep the ways of the Lord by doing what is right and just, so that the Lord will bring about for Abraham what he has promised him." God tested Abraham to release his only son back to God (as we all must release our children at some point), and Abraham respected and obeyed God. Finally, the record shows that Abraham honored his wife in life and in his death. And God did all he promised Abraham he would do: we read about it in the rest of the Bible, and history proved it happened. Now we look back on Abraham Altmans life and see that the name
of Abraham has found its way into the very fabric of this mans life, who would not be the man he was
without his beautiful and loving wife, Anita. Because Abe believed God and obeyed him. great blessings
have come to him. his family, his neighbors, his synagogue and the people of Syracuse. We, Abe and Anitas neighbors and friends want all Syracuse to know more about Abe Altman. so that others would be inspired to become like him.
By George F. Studor Jr
Syracuse Herald Journal August 24, 1997
Burial Location
P49A