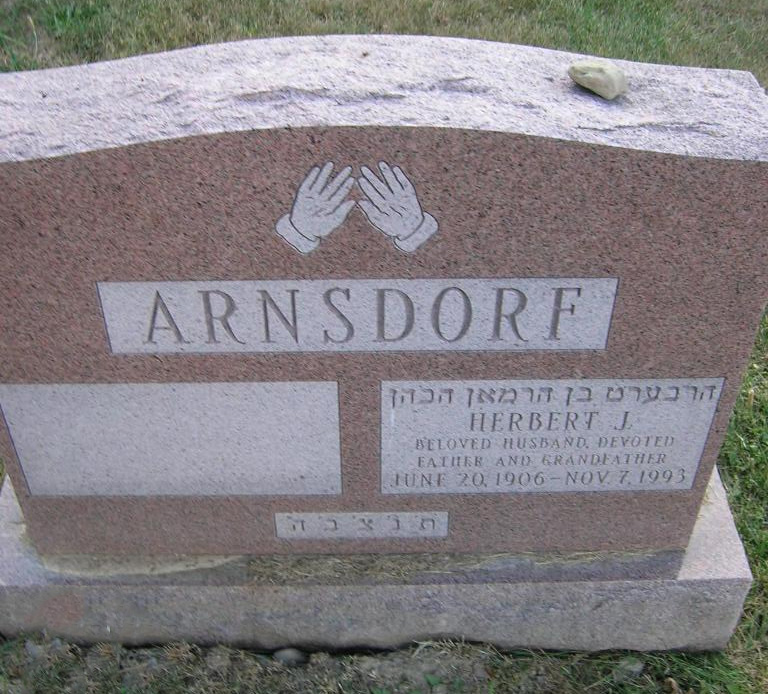 Vera I. Arnsdorf, 83, of Silver Spring, MD, died Tuesday, April 25 at the Hebrew Home in Rockville, MD. Mrs. Arnsdorf was born in Breslau, Germany, (now Wroclaw, Poland). After spending 10 years in Shanghai during WW II, together with her husband, Herbert, she became a resident of the Syracuse area for 48 years. She retired as a medical assistant and administrator after serving several physicians in and around the Syracuse area. She completed her high school equivalency in the mid 1960s and was a member of Temple Adath Yeshurun. Later, when she moved to Silver Spring, MD, she became a member of Ohr Kodesh Congregation in Chevy Chase. Survived by her two sons, Dennis (Maxine) and Ralph (Carol McAfee) and four grandchildren. Services will be conducted at 2 p.m. on Wednesday, April 26, 2006 at the Birnbaum Funeral Chapel, 1909 East Fayette St. Friends may call on Wednesday at the chapel from 1 to 2 p.m. Burial will be in Adath Yeshurun Cemetery. Contributions may be made to Temple Adath Yeshurun, 450 Kimber Rd., Syracuse, NY 13224, Ohr Kodesh Congregation, 8300 Meadowbrook Lane, Chevy Chase, MD 20815 or Hadassah, 1220 E-W Highway, Silver Spring, MD 20910. Birnbaum Funeral Service Inc.
Published in the Syracuse Post Standard on Apr. 26, 2006
Burial Location
K78