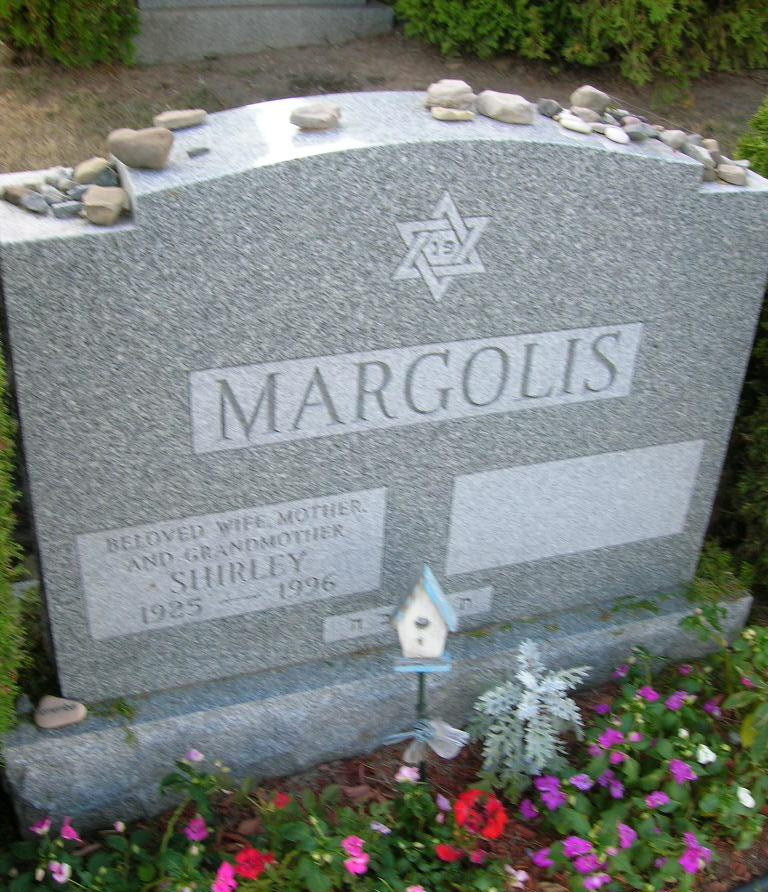 Shirley Margolis taught her children and grandchildren the meaning of unconditional love. She taught them that family should always be the most important thing in their lives. My mother had so much love for her family, and all of had for all of us has been taken and passed on," said Mrs. Margolis daughter, Gail Alpern. "The love she gave will be carried on in all of us for the rest of our lives." Mrs. Margolis, 70, of Somerset Road. Syracuse, died Sunday at St. Josephs Hospital Health Center. A non-smoker, Mrs. Margolis was diagnosed three months ago with lung cancer. "Shirley was a very vital person, and she was much younger than her 70 years," Mrs. Margolis friend of 25 years, Billie Shapiro, said today. "She adored her family, and they were very, very close. She never missed one of her grandchildrens games, and she was always thinking of other people and doing things to help someone else." An avid golfer who also enjoyed bridge, gardening and growing African violets, Mrs. Margolis never used a golf cart until she became ill. "She always wanted to walk the 18 holes," Shapiro said. "She was very athletic and sports-oriented." Mrs. Margolis was a life resident of Syracuse. She was a graduate of the former Syracuse Central High School. During World War II, Mrs. Margoiis was a member of the Mellowettes, a group that sang and danced locally for the troops. She was secretary to the program director at WSYR radio from 1946 until 1952. During that time, she had her own weekly radio show on WSYR, performing under her stage name, Jackie Lee, on "The Jackie Lee Show." Mrs. Margolis sang with many local bands, performing often at Hotel Syracuse for high school and college proms. She performed with the bands of Tommy Dorsey, Horace Heit and Kay Kaiser. She was first runner-up in a national talent competition during the 1940s sponsored by Horace Heit and held in Rochester. She was a member of Temple Adath Yeshurun and the Sisterhood of the Temple. Mrs. Margolis was a member of Drumlins East Golf Club, former president of its womens league, of the Syracuse District Womens Golf Association. She was active in the annual Babe Zaharias Golf Tournament. She also enjoyed tennis, skiing and cooking. Her husband, children and grandchildren were at her bedside when she died Sun- "We talked about life and love, and we have talked about dying," her daughter said. "She told us to stay together as a family and to care for each other/She said she would be fine and that we\\'d all be together again somehow." Surviving are her husband of 46 years, Harold; a son, Lawrence of Fayetteville: a daughter. Gail Alpern of DeWitt; a brother, Milton Jachles of Rochester: a sister, Arline Sebelowitz of Syracuse; two granddaughters; two grandsons and several nieces and nephews. Services will be 11 a.m. Tuesday at the Birnbaum Funeral Chapel, the Rabbi Charles S. Sherman officiating. Burial will be in Adath Yeshurun Cemetery. Calling hours are 9:30 to 11 a.m. Tuesday at the chapel, after the services, friends may call at their convenience at the home of Mrs. Margolis daughter. Gail Alpern, 706 Standish Drive. Contributions may be made to the youth and education funds at the Syracuse Jewish Community Center.