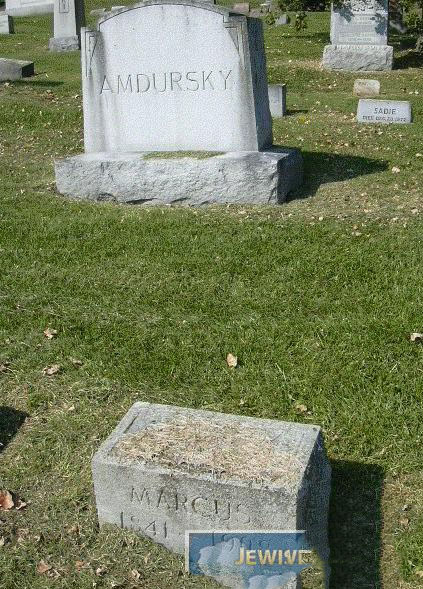 Amdursky-In this city, on the 7th inst.. Marcus Amdursky, aged 67 years. He Is survived by a brother, Abraham Amdursky of this city, and by a son, Moses Amdursky of Chicago. Funeral is at the residence of his brother, Abraham Amdursky, at No. 756 Harrison street, at 3 o\'clock Monday afternoon. Friends are invited to attend. Burial at Jamesville Gate Cemetery.
Syracuse Post Standard June 8, 1908

SON WILL MAKE CONTEST. AMDURSKY SAYS FATHERS WILL SHUTS HIM OUT.
Instrument allows him residue. But He Says That After Debts and Specific Legacies Are Paid, There Will Not Be Any Residue. Attorney D. Bl. Magee appeared In Surrogates court this morning and gave notice that Moses Amdursky. objected to the probate of the will- left by his father, the late Marcus Amdursky. He said that the estate was in such a way that the son would receive nothing, but everything would go to relatives of the deceased. Marcus Amdursky wan a clothing manufacturer, who died a short time ago. He made a will In which he made bequests ranging from $100 to $750 to a number of nieces, nephews, etc. These bequests amount to $2-300. He directed "that the residue of the estate go to his son". Abram Amdursky, Brother of the deceased, was named as executor of the will. The estate consisted mostly of stock In the factory. It was reported at the time of. Mr. Amdurskys death that the stock was worth $17,000. Since then, it is said it has dwindled in value and now it is worth only $3,000. Against this there are claims aggregating $3,600. The son says after the debts are paid and the other legacies are taken care of there will be nothing left for him and for that reason he wants the Will set aside. Attorney William Rubin for the executor appears for the probate of the will. Surrogate Glass adjourned the matter until tomorrow morning to give. Mr. Magee opportunity to prepare written objections to the will.
Syracuse Herald, Tuesday, July 7, 1908
Burial Location
B20A