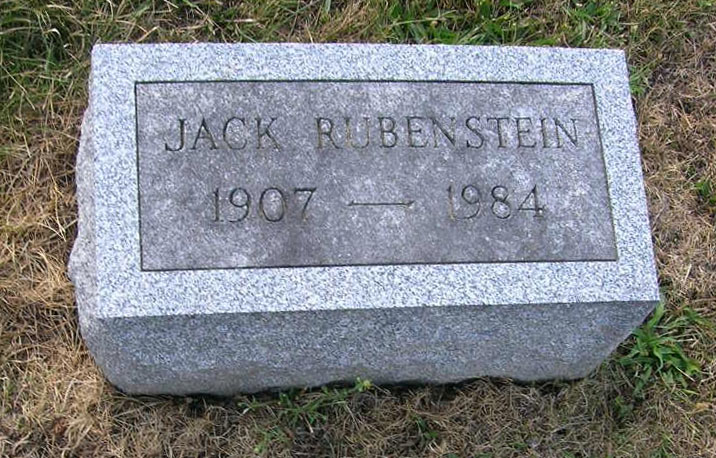 Jack Rubenstein, 77. formerly of Syracuse, died Monday in Pompano Beach. Fla. A native Syracusan. Mr. Rubenstein resided in Boca Raton. Fla, 12 years. He retired in 1962 as president of Rochester Shoe Stores. Mr. Rubenstein and his father, Louis, founded the company more than 50 years ago on West Street The store was later moved to larger quarters on South Geddes Street and was soon expanded with several stores in the Syracuse area. On the store\'s 50th anniversary in 1976. Mi. Rubenstein explained that the name "Rochester" was used because the city was the home of several widely known shoe companies at the time.
Mr. Rubenstein was a member of Temple Adath Yeshurun and Philo-Mount Sinai Masonic Lodge 68. and a former member of the Empire State Footwear Association. He was active with the United Fund Drive in Syracuse and was a former president of the Home Owners Association of Colonies of Margate. Fla. Surviving are two sons. Dr. Harold of Fayetteville and Melvin of Manlius: a brother. Morton of Fayetteville: a sister. Jean Hirshman of North Lauderdale. Fla., and six grandchildren. Services will be at 11 a.m. Thursday at Birnbaum Funeral Chapel Rabbi Irwin L Hyman and Cantor Harold Lerner officiating. Burial will be in Adath Yeshurun Cemetery. Calling hours will be 10 to 11 a.m. Thursday. After the services, friends may call at their convenience at the home of Melvin Rubenstein. 81S6 Pembroke Drive., Manlius. Contributions may be made to the Foundation of the Jewish Home of Central New York.